The Indian cricket team practiced ahead of fourth Test match that will be played in Sydney on January 3, 2019 in Sydney against Australia.

India won the third test, boxing day Test match in Melbourne and is 2-1 lead in the Test series. 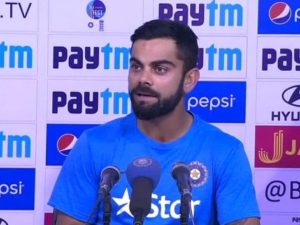 Indian Cricket team Captain Virat Kohli said that it has to be an obsession to win away from home. Team India will face Australia in the fourth test of the ongoing series. Kohli said that the motive right now for the team is to overcome the challenges and not to change the history.

Virat Kohli said: “It has to be an obsession to be able to win away from home because you cannot afford to be negative for even a single minute a single day on tour.

You need to be confident about putting a match winning performance to not just score good away from home but to make your contribution significant to make the team win”.

Virat Kohli said that spinner R Ashwin is the vital part of the team and he is important in Test Cricket.

He said: “It is unfortunate that R Ashwin had two niggles that in couple of tours. The trainer had spoken to him about what is required in order to overcome the injury.

He is very important in Test cricket and he is a vital part of the team. We want him to be 100 percent fit”.

R Ashwin will not play the final test due to his injuries.