KXIP vs SRH Highlights 2018 : A powerful century from Chris Gayle, the first in IPL 11, helped hosts Kings XI Punjab to end the three-match winning streak of Sunrisers Hyderabad on Thursday at Mohali.

Thanks to the Jamaican’s deadly knock, Kings XI Punjab eased to a 15-run win over Sunrisers Hyderabad.

Chris Gayle smashed an unbeaten 104 from 63 balls with 11 sixes, in what was his sixth IPL century to take Kings XI Punjab to 193 for 3 in 20 overs after R Ashwin won the toss and opted to bat first. Karun Nair contributed 31 from 21 balls as Kings XI Punjab despite starting cautiously, ended up on a high note.

Chris Gayle was particularly severe on Afghan leg spinner Rashid Khan, who was taken for 55 runs in his four overs. Bhuvneshwar Kumar was given all the respect by Chris Gayle as he finished with 1 for 25 in four overs. 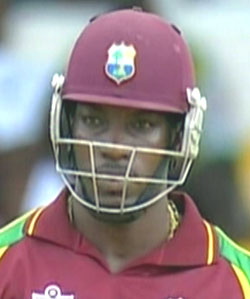 In their run chase, Sunrisers Hyderabad were unlucky as their leading run getter Shikhar Dhawan hurt his elbow in the very first ball he faced in the innings. It was a short ball from left-arm seamer Barinder Sran that ensured that Shikhar Dhawan retired hurt on 0 and couldn’t come back again to bat.

SRH captain Kane Williamson scored 54 from 41 balls while Manish Pandey came up with an unbeaten 57 from 42 balls but there wasn’t any real firepower coming in from them to challenge the target of 194. Shakib Al Hasan managed a decent 24 not out from 12 balls as well but SRH fell quite short of the target at 178 for 4.

The KXIP vs SRH Highlights 2018 along with Chris Gayle first IPL 2018 century can be watched on HotStar.