The Board of Cricket Control in India (BCCI) has announced the 15-member U19 squad for the U19 Cricket World Cup on Monday that is scheduled to begin on January 17, 2020.

The U19 cricket World Cup will take place in South Africa with the final to be played on February 9, 2020 at Potchefstroom. Priyam Garg will be the Captain and Dhruv Jurel as vice-captain/wicket keeper. India U19 is placed in Group A, other teams include Japan, Sri Lanka and New Zealand. 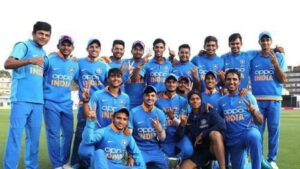